Lawmakers will return to Nashville on Monday evening to reconvene for session and officially begin their legislative business for 2021. Typically the legislature eases into its duties over the course of the first few weeks, and that looks to be the case again this year, with the budget taking center stage in the next few weeks.  The members of the General Assembly spent the past two weeks shuffling offices and finalizing legislation for introduction in anticipation of the bill filing deadlines in both chambers, February 11th and 17th, respectively.

Upon returning to Nashville, lawmakers will hear from Governor Bill Lee (R-Franklin) in a joint convention at the War Memorial Building for the Governor’s third annual “State of the State” address, in which Lee will assess the overall condition of the state and outline his legislative priorities for 2021, while also releasing his proposed budget.  This week, Lee provided a brief forecast for his speech, remarking “Tennesseans have faced incredible challenges this past year and the State of the State address will both reflect on this unique place in history and cast a vision for a healthy and prosperous 2021.”  In a surprising development, Tennessee’s revenues exceeded projections in the month of December 2020, showing $156 million more than originally forecast. For the past five months, year-to-date revenues were $732.8 million more than the budget estimate.  If this trend continues, the state’s general fund could result with 5% more than the previous fiscal year.  However, uncertainly remains with respect to the Lee’s spending priorities in his upcoming budget proposal and how the budget process will differ in the 2021 legislative process.

Next Tuesday, committees in both the House and Senate will officially open, although we anticipate more of a focus on the introduction of new members and laying out each committee’s rules during session, particularly in light of the public’s limited access to the Cordell Hull Building and uncertainty with respect to legislative operations during the pandemic. Very few bills, if any, will be considered next week, with the expected focus being on the budget and budget hearings and little in the way of a legislative agenda.

This week, Tennesseans received encouraging news on the COVID-19 pandemic, with the state seeing a decline in positive cases for the first time since the fall.  Hospitalizations dropped by more than half since peaking on January 6th and remain at their lowest levels since mid-November. The Department of Health reported fewer infections statewide; however, the state’s death rate remains higher than the national average, with over 10,000 deaths resulting from the virus. The Tennessee Department of Health announced that persons 70 and older are now eligible to be vaccinated, with the state expecting to receive 93,000 doses of the vaccine this week, a 15% increase from recent allocations. Tennesseans 65 and older are expected to begin vaccinations by March.

Tennessee will see its fair share of COVID-19 related legislation this session, as lawmakers filed a batch of bills related to the state’s response in addressing the pandemic. The legislative measures largely reflect Tennessee’s unique response to addressing the pandemic, with the Governor refusing to issue a statewide mask mandate, opting instead to focus on local autonomy and personal choice in combatting the spread of the virus.  In the absence of a statewide mandate, many local governments put face mask mandates in place, in addition to variations of local “stay at home” orders and other business restrictions within their jurisdictions.  Senator Joey Hensley (R- Hohenwald) introduced a measure this week that prohibits private businesses from denying service to customers who do not wear a mask or receive the vaccine. The legislation deems a business  “discriminatory” if it denies goods or services to customers based upon their “use of a medical device” or “medical treatment,” i.e. masks and vaccines.  Similarly, Senator Janice Bowling (R- Tullahoma) and Rep. Bud Hulsey (R-Kingsport) recently introduced a measure to prohibit state and local authorities from requiring vaccination for employment, and Representative Brandon Ogles (R-Franklin) filed a bill to prevent the state from regulating gathering sizes in homes and churches.  In 2020, Governor Lee encouraged churches to move to virtual, but Lee also issued an executive order early in the pandemic blocking local governments from limiting religious gatherings.

After Governor Lee’s “State of the State” address Monday evening, we expect a flood of new bills to be filed up until the bill filing deadlines, so please expect your bill tracking reports to continue to grow.  As always, please do not hesitate to reach out to us if you have any questions. Have a great weekend. 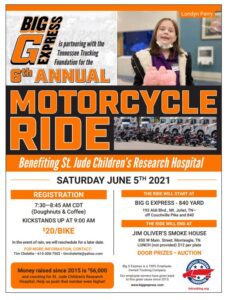 Click Here to Donate to St. Jude on Behalf of the Big G Express Event

This month, the 112th Tennessee General Assembly convened in Nashville on January 12th to begin the 2021 legislative session, starting the first of a two-year legislative session. The first week of session is referred to as “organizational week” where the House and Senate adopt rules of order, elect leadership, and make new committee and office assignments.  However, the General Assembly held the organizational session in two days, shifting gears quickly into a short regular session at the tail end of the week.  The General Assembly reelected Lt. Governor Randy McNally (R- Oak Ridge) – who serves as Speaker of the Senate – and House Speaker Cameron Sexton (R-Crossville) to their respective leadership posts.

Now, having a full session under his belt and with a brand new General Assembly, Speaker Sexton put his own stamp on the committee structure, with a revamped committee structure and a handful of new committee chairmen.  The House Transportation Committee will continued to be chaired by Rep. Dan Howell (R- Georgetown) and will only have one subcommittee, chaired by Rep. Sam Whitson (R- Franklin). The Senate Transportation Committee will continue to be chaired by Senator Becky Massey (R- Knoxville). Representative Patsy Hazlewood (R- Signal Mountain) will now serve as Chair to the powerful House Finance, Ways & Means Committee, with Representative Gary Hicks (R- Rogersville) chairing the subcommittee.

Following the adjournment of the General Assembly’s special session, the legislators now stand in a two-week recess, with lawmakers returning to Nashville on February 8th to begin the regular session with Governor Lee’s annual State of the State Address. The Senate set their bill filing deadline for Thursday, February 11th, and the House set its deadline for Wednesday, February 17th.  As always, it is a pleasure to represent you at the Tennessee General Assembly.