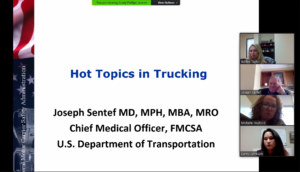 The Southeast TN Council held another virtual meeting today, 7-28-2020, in place of our in-person meetings. We had 25 participants join on the meeting.

The presenter for this meeting was Joseph Sentef MD, MPH, MBA, MRO, the Chief Medical Officer for the FMCSA and Chief MRO for CMS. He is also a longstanding Chattanooga area physician.  He has been in Washington DC for nearly two years trying to help the trucking industry.  He was able to present general information about FMCSA updates on topics such as Sleep Apnea, Hair and Oral Drug Testing, and Clearinghouse trends.

Two interesting facts to note that the presentation kicked off with:

Joseph Sentef was able to cover a large amount of information regarding sleep apnea as well as answer many questions from our participants. We really appreciate the time he took out of his day to meet and talk with us!

Understanding the Impact of Nuclear Verdicts on the Trucking Industry

The American Transportation Research Institute recently released comprehensive research that confirms that large verdicts against trucking fleets are increasing dramatically, both in number and in size of awards. ATRI’s research is partially based on a newly created trucking litigation database that provides detailed information on 600 cases between 2006 and 2019. In the first five years of the data, there were 26 cases over $1 million, and in the last five years of the data, there were nearly 300 cases. The number of verdicts over $10 million nearly doubled in that time.
In response to arguments that nuclear verdicts reflect real-world cost increases, the research documents that from 2010 to 2018, the size of verdict awards grew 51.7 percent annually at the same time that standard inflation grew 1.7 percent annually and healthcare costs grew 2.9 percent annually.
The research also surveyed and interviewed dozens of defense and plaintiff attorneys as well as insurance and motor carrier experts, and generated a qualitative analysis for why the litigation landscape has changed, recommendations for modifying pre-trial preparations, litigation strategies and mediation approaches, and how large verdict awards impact both safety and insurance.
At 80+ pages, ATRI’s report is a data-rich analysis with important findings that motor carriers, their defense attorneys and their insurers can implement to mitigate the frequency and size of large verdicts.
Pre-Crash Actions by Motor Carriers are Critical
• Both attorney bars emphasized that crash avoidance is everything and that strictly adhering to safety and operational policies is essential to staying out of court and/or reducing award sizes.
• Almost any failure to adhere to Federal Motor Carrier Safety Regulations (FMCSRs) or company safety policies will be the focus of plaintiff arguments.
• From a litigation standpoint, motor carriers should consider FMCSRs as minimum standards that can and should be exceeded. The ability of defense attorneys to document carrier or driver safety activities that exceed FMCSRs carries great weight with juries.
Litigation Preparation is – and should be – Both Complex and Costly
• Risk Assessments must be thorough and objective. Case vulnerabilities and potential liabilities must be acknowledged, and vetted against realistic financial damage projections.
• The ultimate strategy-driving question internally posed by most plaintiff attorneys and successful defense attorneys is: “what operational, safety or training factors could have prevented the crash in the first place?”
• Experience matters. Both defense and plaintiff attorney bars noted that attorneys inexperienced in trucking litigation are harmful to all parties.
When Mediation and Settling Makes Sense
• There was general agreement that mediation and settlements are missed opportunities, particularly by the defense when they do not believe that negligence by the carrier and/or driver exists.
• If mediation and settlements are pursued, initial offers should be realistic and equitable. Multiple plaintiff attorneys describe the frustration and consequence of initial “low-ball”

The 111th Tennessee General Assembly adjourned sine die just after 3 a.m. on June 19th with
agreements on the budget, but the two chambers failed to come to terms on major legislative initiatives
such as COVID-19 protection for businesses, certificate of need legislation, and telemedicine. This
month’s adjournment lacked much of the pomp and circumstance typically associated with sine die,
perhaps a fitting end to a session that began with a new Governor and a considerable amount of new
members, and would ultimately experience two different House Speakers, a tornado, a pandemic, three
separate budgets in two years, and an uncharacteristic level of sparring between the two chambers
regarding both the scope of legislation to be deliberated and — in several cases — the content of that
legislation. Lawmakers also grappled with an unprecedented budget situation and frequent protests.

Gone was much of Governor Bill Lee’s once-ambitious legislative agenda, voluntarily shelved by the
Governor in the interest of focusing on managing a budget situation that was greatly affected by the
pandemic. In the end, legislators passed a $39.5 billion budget that barely resembled the one that the
Governor proposed to the General Assembly during his State of the State Address in early February.
Both the budget and the legislative process were greatly impacted by COVID-19, especially since the
Legislature recessed from March 18 to June 1 to stay at home for the pandemic.

Taken as a whole, the final budget largely addresses a $500 billion shortfall in the current year budget
and a $1 billion deficit in the budget that begins on July. Highlights include a $25 million sales tax
holiday, $210.5 million for cities and counties (including raising the cap on the amount allocated to
Memphis and Nashville to $10 million each), and $100 million to the rainy day fund. The budget
eliminates the pay raises for teachers, state employees, and higher education that had been previously
promised. Originally, the fund for cities and counties was set at $100 million and reserved for a one-time
expense relative to capital maintenance, utility upgrades, public safety projects, or road projects.
However, given the pandemic and storms that hit the state, cities and counties will be given flexibility on
the use of the funds. The final budget managed to preserve most of Governor Lee’s reductions, and
critical items emerged unscathed, including commitments to fully fund the Basic Education Program
(BEP), Pensions & Health Insurance, debt service requirements.

This month, the General Assembly passed legislation (SB2667/HB2842) to allow the Tennessee Trucking
Association Foundation to hold its annual raffle in December which benefits numerous charities and
educational programs. Additionally, the General Assembly passed the Tennessee Trucking Association’s
bill (SB1608/HB1594) dealing the drop deck length distance from the king pin to rear of the trailer, a
measure that expands, from 50 to 52 feet from the point of attachment to the tractor, the length a
truck-tractor and semitrailer or trailer combination that may operate over the federal and state highway
system in Tennessee.

Now that the General Assembly’s flag has been lowered from the Capitol cupola, thus
signaling adjournment, legislators’ attention turns toward re-election — with all House seats and half of
the Senate seats on the slate for the August primaries and November general election. Lawmakers will
now return to their districts, begin fundraising – something they are prohibited from doing while
legislature is in session — and immediately prepare for the August 6 primaries, with only one month
remaining until early voting begins.

On behalf of the Tennessee Government Relations Team at Adams and Reese, it is an honor and a
privilege to serve you before the Tennessee General Assembly, and we wish you and yours good health
and a relaxing summer. As always, please do not hesitate to contact us if we can further serve you in
any way.