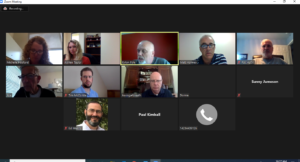 The Southeast TN Council continued to have virtual Zoom meetings today, 6/23/2020, in replacement of our typical in-person meetings.

This month’s meeting was a discussion on items such as, the New Hour of Service Rules, Cameras and FMCSA Audits. Matt Holmes, Southern Champion Tray and Kevin Galbreath, Galbreath Consulting Services will be discussing some of these items. We also had time for everyone to share what they are doing and/or ask questions of the group.

Other topics discussed include what issues are being faced with ELD systems, and facility parking availability, unforeseen circumstances with the New Hours of Service Rules. 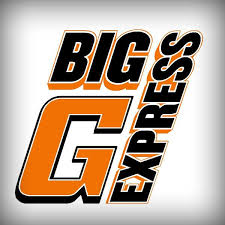 June 3, 2020 (Shelbyville, Tenn.) —The fifth annual Big G Motorcycle Ride benefiting St. Jude Children’s Research Hospital was a roaring success with the Shelbyville-based carrier’s riders and supporters raising $25,000, which was $15,000 more than their goal this year.
Starting in Mt. Juliet, Tenn., kickstands went up at 9:00 a.m. Saturday, May 30, sending the 148 registered motorcycle riders approximately 75 miles to Monteagle, Tenn. where the fundraiser auction was held at Jim Oliver’s Smokehouse Restaurant.
The weather and atmosphere were ideal according to Big G Manager of Driver Recruiting and Driver Services Karla Butler who said, “Everyone should do this! Put it on your bucket list! It was very powerful – the roar of the motorcycles. Everyone came together as a family.”
Big G’s Vice President Deanna Phelps stated, “It was like a big family reunion. Everyone was relaxed and happy to support the kids at St Jude’s… absolutely wonderful day!”
All proceeds go to St. Jude Children’s Research Hospital to help it continue to lead the way in how the world understands, treats, and defeats childhood cancer and other life-threatening diseases.
Big G professional driver and fundraiser organizer Tim Chelette, was overwhelmed by the turnout and donations. “If you were there, you know you really enjoyed your ride! We had a blast. It was awesome to see you all coming in, showing up and showing out… Last year we raised $14,628, this year it was $25,000! Can you believe that?” said Chelette. “You brought your money, you brought your time, and donated to a great cause. St. Jude Children’s Hospital really does appreciate it, I do and Big G really does appreciate it. We can’t do this without you.”
Chelette stated via Facebook that the date for next year’s ride will be announced in October or November.
About Big G Express, Inc:
Founded in 1995, the Big G Express Family of Companies include Big G Express, Big G Logistics, Big G Warehousing and Ike Transportation. The company is headquartered in Shelbyville, Tenn., and is 100% employee owned. The companies provide general commodity, irregular route, dry van truck load, flatbed, logistics and warehousing services to customers nationwide. 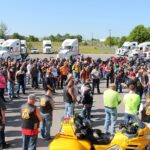 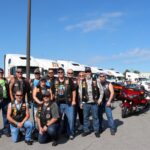 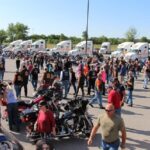 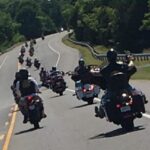 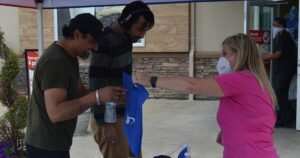 TENNESSEE – June 1, 2020 – The Tennessee Trucking Association was honored to show our appreciation to truck drivers on Friday, May 29, 2020. We partnered with AAA’s Thank A Driver Campaign and helped hand out goody bags to the amazing truckers that stopped by the Lebanon, TN Pilot truck stop. The goody bags contained a bottle of hand sanitizer, AAA hats, pen, keychain, lens cloth, and a free drink coupon to any Pilot location!

“It is so important, especially now, that we thank our essential truck drivers. All across America, these men and women are working day and night to stock our store shelves, deliver medical equipment to hospitals, and so much more. So, from everyone at the Tennessee Trucking Association to the truckers of America, we appreciate you” says Donna England.

We wanted to give Pilot a public thank you for allowing us to honor these drivers at their location! Thank you to AAA for providing the goody bags.

For more information about the TTA, please visit tntrucking.org.

The Cordell Hull Building came back to life in May as lawmakers reconvened in Nashville for committee meetings in advance of this week’s floor session.  In late May, the House was particularly busy, kicking things off with subcommittee meetings last week, following the long Memorial Day weekend.  Each of the House subcommittees generally took up where things left off prior to the March adjournment, working on a lengthy slate of bills – and sometimes working well into the evening – with the goal being to wrap up all subcommittee work by the end of this week.  Meanwhile the Senate only returned in May for a Finance Committee meeting, consistent with the Senate’s stated objective of only considering “time sensitive” and “mission critical” bills, and items related to the budget and the coronavirus pandemic.

The differing approaches of the two chambers highlighted one of the more intriguing rifts that have taken place this session, as the bodies have remained at odds regarding the scope of the legislation that would be deliberated once the legislature returned to Nashville for the scheduled June 1 resumption of session.  While both Governor Lee and the Senate preferred a more focused approach in light of the COVID pandemic and the massive blow to Tennessee’s economy, the House advocated for a much broader scope, arguing that if the legislature is in session, it needs to be deliberating policy.  The two bodies have remained in a bit of a standoff, and the end result has been a lack of a consensus on which bills would be considered.  Indeed, a vast majority of the 391 bills calendared and debated the last week of May in House subcommittees and committees are not likely to be taken up by the Senate.

There was even a lack of consensus between the House and Senate on access to the Cordell Hull building, which is made clearly obvious as soon as visitors walk up the steps to the hearing rooms on the first floor.  The South end of the first floor – containing the House committee rooms — remained open to the public, albeit with temperature checks, mandatory masks, controlled attendance, mandatory social distancing and the installment of plexiglass “screens” around each member’s seat.  Meanwhile, velvet ropes cordoned off the North end of the first floor, which contains the Senate hearing rooms, with only legislators and staff allowed to pass. Lobbyists and the public have been encouraged to schedule meetings remotely and via teleconference, and in-person meetings, if absolutely necessary, must be scheduled one day in advance in the Senate, with members of the public being escorted to the meeting and asked to leave once the meeting is finished.  Testimony in committee hearings was discouraged as well.  In light of these protocols, attendance at the Cordell Hull Building was sparse in May, with only a handful of lobbyists and members of the public attending or testifying in committee meetings.

The General Assembly will meet in the House and Senate chambers in June, with the House set to take up bills that were set to be discussed before the recess. Both bodies will take up committee calendars, with some more packed than others.  What is not clear is whether any of the bills that are passed in the House but are not on any Senate “lists” will later be considered in the Senate, or whether the Senate will remain steadfastly committed to quickly addressing budget and other matters it deems mission critical and adjourning in short order. If the latter remains the case, it is conceivable that the General Assembly could adjourn sine die in mid-June, if not sooner.  Also note that this is the final year of the 111th General Assembly. As such, no bill carries over to the 2021 session.  The legislative slate of all bills that do not pass this year are automatically wiped clean, and sponsors that wish to pursue them in the 2021 session must draft and file them as a new bill, starting the legislative process from scratch.  We are continuing to pursue the drop deck length legislation for the TTA and are actively working with our sponsors and TDOT on the effort for the remainder of session.

We will remain on top of this evolving and fluid situation at the Tennessee General Assembly.  Please let us know if you have any questions.